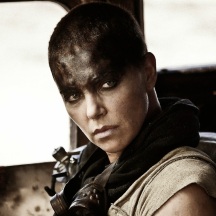 Jane is the protagonist of the CW’s fantastic Jane the Virgin, a single mother, who is incredibly devoted to her family. The series kicks off with her being ‘accidentally, artificially inseminated’ leading to her unexpected pregnancy. Jane is a wonderful character to watch, optimistic and brave but grounded – she never becomes annoying. Jane is of course supported by a host of strong, brilliant women from her headstrong mother Xiomara, to her level=headed, forthright grandmother Alba. Jane’s decision to remain a virgin at the beginning of the series is unconventional, but she consistently uses her agency to make the decision for herself. She never judges other characters for their sex lives and makes her own decisions about her own. Jane faces multiple obstacles in her life but remains the strong, kind, forthright character we all love.

If you haven’t seen Mad Max Fury Road – then get out from under the rock you’ve been living under and relax into one of the most feminist movie spectacles of the last ten years. Furiosa, played by Charlize Theron, is the short haired, one armed, prized driver of Immortan Joe’s fleet. She begins her story by breaking out his captured brides and escaping with them, headed for an Eden-like land of her childhood. Despite the movie’s name, she, not Mad Max, is it’s main character. She proves herself to be badass and strong and heroic. She takes the women away, determined to set them free.  She does this without seeking reward or without any regard for her own safety. She is strong and resourceful, pushing the other characters forward and inspiring the wives to take up arms to defend their own freedom. She is the one who ultimately defeats Immortan Joe and returns to his citadel to claim victory for the citizens.

Martha Jones, how we miss thee! One of our long time laments about Doctor Who is that Martha only received one season. Martha Jones was one of the best companions that the Doctor never noticed, and is one of the most impressive women to ever take the role.  She accompanies David Tennant’s Doctor on some of his most iconic adventures – she meets Shakespeare, faces off against the Master and finds herself at the end of the world. She has a fantastic moment during the third series episode, The Family of Blood, where she proves her doctor’s credentials when she recites the name of every single bone in the human hand – a truly cheer-worthy moment.  Martha is brave and resourceful and has one of the best, most assertive exits from the TARDIS and the Doctor’s life. She is one of the most heroic characters ever to grace Doctor Who – and deserves to be remembered as such!

I can’t write a list about feminist heroes and not include Eowyn from Lord of the Rings. I just can’t. Arwen and Galadriel are incredibly cool as well but I can remember being 12 years old, sitting in a cinema and watching Eowyn don her armour and sneak out as part of the Rohirrim. There are few more cheer-worthy moments than when she faces off against the Witch King of Angmar and defeats him by the very fact that she is a woman – delivering the immortal line “I am no man!”. Eowyn is the girl who was raised by men, who was taught how to fight and emerges as a ‘shield maiden’ of Rohan. In the book her constant need for war is replaced after her own healing for a need to heal others. This disappointed me as a child reading it, it felt like some of her fire was diluted. But she makes the decision herself and still has agency. Her decision to make something out of her life is a positive one, as it’s pointed out that she had planned to die in glory on the battlefield and now has to figure out how she is going to go on living her life. She’s still one of my favourite female characters and always will be- for her complexity and her strength and her adamance that no one will tell her who or what to be.

Rebecca Bunch is the bubbly, hard-working and anxiety-filled protagonist of Crazy Ex-Girlfriend. Rebecca is the girl who did everything right. She studied hard, she got the great job at a law firm in New York and despite all of this she was dreadfully unhappy. A chance meeting with her teenage ex boyfriend has her hop on a plane and move to his home town of West Covina California. Which, although it sounds like a ridiculous move, it’s exactly the one our Rebecca needs. West Covina becomes her home, where she makes new friends and even more bad decisions. It helps that she narrates her life through brilliantly written, thoughtful songs. Rebecca is a staunch feminist, and although she has trouble showing people that she cares, her principles towards other women are almost always on point. All of her female friendships feel genuine and are some of the best aspects of the show to watch. She is continually commenting on double standards for women and men and is an example of a successful woman who embraces her femininity. Rebecca may have problems in her personal life, but she is a smart and engaging character to watch and really feels like someone you might know.

To be fair we could have listed most of the women in Studio Ghibli’s back catalog and we’d have an interesting list of complex, intelligent feminist characters but Lady Eboshi is one of the most interested in equal empowerment. Of course, so is Nausicaa of Nausicaa: Valley of the Wind. Lady Eboshi is painted as the antagonist of Hayao Miyazaki’s Princess Mononoke but it’s her feminism and socialism that are her redeeming character traits. She is the leader of the newly built Irontown and has created an independent industrial community incorporating all people as workers. It’s mentioned that she ‘went around buying up the contracts of every brothel woman she could find’ and the women are incredibly loyal to her. They also are all hard workers in the iron plant. The lepers are her engineers, but she is certainly using them for her own ends. They’re all treated like equals by Lady Eboshi – although her equality doesn’t reach to the Princess of the film’s namesake.  Lady Eboshi is a character who’s downfall is her pride and her arrogance but she is a staunch feminist and she does learn from her mistakes – eventually. She’s one of Ghibli’s more complex characters but she is also one of its richest, one of it’s most important.