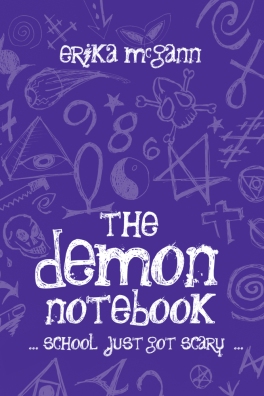 Erika McGann is a young writer from Drogheda, now living in Dublin.  Erika has written four books in her Demon Notebook series and is just about to release the first book in her mystery series for children: Cass and the Bubble Street Gang. The Demon Notebook series explores the adventures of a group of school friends who soon discover their powers as witches. I was delighted to get the opportunity to chat to Erika about writing, fantasy, female friendships in books, and how the sound of a coffee shop makes it easier to write!

When did you first know you wanted to be an author?

When I was really young, writing was all I wanted to do and my parents were very encouraging. They bought me a huge hardback notebook and they paid me 10p a day to write in it. I’m not sure about the ethics of that but it really really worked! It got me into the habit of writing every day. But I got out of the habit in my teens and I didn’t write again until I was about 28. That’s when I jumped into creating The Demon Notebook. So there was a huge gap when I should have been doing what most writers are doing which is working hard and perfecting their craft, but I went about it a different way!

Who were your favourite authors growing up, your influences?

I’m a huge Roald Dahl fan and I’ll always be a Roald Dahl fan I think. His books were some of the few books that I re-read as a child, and I don’t re-read books very often, but his were absolute favourites. His writing influenced me a lot, and still does.

I also loved CS Lewis and The Worst Witch books as well.

“There was a huge gap when I should have been doing what most writers are doing which is working hard and perfecting their craft but I went about it a different way!”

I wasn’t hugely into horror as a child but my first introduction to horror stories was the Luvender books by June Considine, which I loved. I remember reading them and being scared, but also liking being scared. So that was my introduction to horror and I really liked it. I’ve a huge grá for anything that has a bit of edge and is a bit creepy. I credit June Considine with that.

I definitely was influenced by that in writing my own books. I was really into the occult and creepy magic. I was never really into  horror that was about gore, it was more about a strange atmosphere and her books really had that. I would have really been interested in the occult stuff as a kid. The story of The Demon Notebook are really based on me and my friends. And that was what we wanted to be. We wanted to be witches and we were dead serious about it too! We made up spells and we read everything we could about it. So that is how the books came about. I mean our spells were always a disaster! But I remember I loved talking about it, like we used to talk about if we could make it snow, or go anywhere in the world. Even though it wasn’t real I remember it as a time in school where I was really happy. So I suppose that’s why I decided to write the books, although I decided to add in some real occult stuff to make them a bit more exciting and scary!

Was that the first novel you had written?

It was the first one, yes. In fact it was the first time I had written in a long time. So the book took a while to complete, because it was rattling around my head for a while. At the time I wasn’t into writing and I didn’t think to write it down, I was just playing around with scenes in my head. So when I finally went to write it things were actually fairly clear. When I sat down to write it was a steep learning curve because I had never written anything long and I hadn’t written anything at all in a very long time. It was very slow going and I made a lot of mistakes. I had to go back and correct them so it was a learning curve while I was doing it. It worked out in the end though and I was surprised at how well it worked.

But people will respond to a good story, and there really is nothing out there like it at the moment.

I suppose basing it on real life helped in that sense. I get that response a lot, where people say it feels like their school and their group of friends. When you add something like that it gives it another dimension of reality.

Also a lot of books aimed at that age group have a big love story or a love triangle embedded into them and I wasn’t really into that. I wanted to do something that was just based on a group of friends.

That’s something different in and of itself I think, and it’s really nice to have a book that focusses on a friendship between girls rather than a love story that is the central relationship.

I think so, and I think that often those relationships are a little underrepresented in books because it’s not seen as important as the love story. But really in school the friendships you have do become your most important relationships. I do have a little bit of romance in the first book though but not much.

I think that’s more true to life though, I mean if they’re anything like me, girls at that age talk about romantic relationships more often than they have romances with anyone.

Exactly, like in the first book on of the characters she has a little flirtation with a guy she has a crush on but that’s how it was! Very awkward and embarrassed, there were no great love stories. We talked about them as if they were great love stories, but more often they were just little crushes.

Your latest book is a mystery for younger readers?

Cass and the Bubble Street Gang, yes. It’s about three friends who have a secret club and have meetings and plan adventures. If The Demon Notebook was based on my school life, then this was based on my home life. We lived in an estate on the edge of town so there were just fields and trees behind it. Running off and having secret clubs and building forts, that was the big thing for us to do and that’s what this new series is based on. The first one will be out in the beginning of March. I’m really excited about them because they’re my first illustrated books The illustrations are just fab and it’s so nice to see the illustrations come to life. Sometimes they’ll come out looking exactly what you thought in your head and sometimes they’d be quite different. I used to be so excited every time I’d see a new illustration of a character to see how they’d turn out.

What are you working on at the moment?

I’m actually working on a picture book at the moment, which is really exciting but it’s quite difficult as well, I’ve had to learn how to write a picture book, because you have new constraints like word count and vocabulary. But it’s been really exciting. I’m also editing the second Bubble Street Gang book. But I always have  a few projects going on at the same time. I find that really useful for writers as well, that if I’m struggling with one project that it can really help to look at another project and work on that instead.

Do you have any advice for young writers?

I’d advise them to read a lot. I find that any time that I’m not reading, I have a tough time writing. When I stopped writing as a teen, it was because I stopped reading – it sounds super shameful to say now – but I just got out of the habit. And I think it’s because I stopped writing, you can’t write if you’re not reading. People take a lot of inspiration from books, but also because of the ease of the language. The sentence structure and the grammar, whether you notice it or not that’s all going in when you read. If you’re not reading then it’s a lot harder when you go to write. And I suppose practice writing every day, get into a habit of writing.

These books are based on your own life, do you ever get in trouble for that?

When I talk to groups about writing I always say that building characters up from real people is one of the easiest things that you can do, because most of the work is already done. It’s much easier to build on someone that you already know. So I say, base it on your friends, base it on your family, which is what I did. I never told my friends who was based on who, but recently one of my friends came up to me and said, ‘This girl Adie, who is afraid of everything, is that me?’ She was kind of put out about it – even though I think that Adie is a lovely character, she’s really sympathetic, but my friend didn’t totally see that side of it! So yeah, you do have to be careful, I suppose in my mind when I was writing it I thought, ‘Oh no one’s ever going to read this’. Although I was just writing about my experience in school and my friends. but you have to be careful that you don’t insult someone or reveal something that was supposed to be a secret! It’s something that you have to keep in mind, that it’s good to take inspiration from your life but you have to make sure that you change things up enough that it’s your own story.