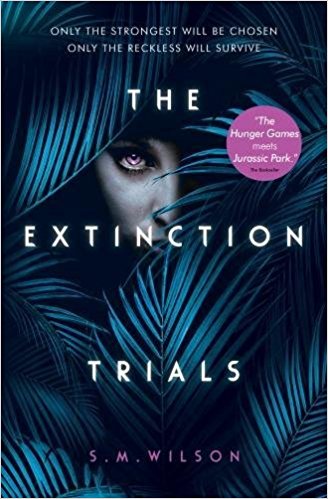 The Extinction Trials have been hailed as ‘Jurassic Park’ meets ‘The Hunger Games’ and that phrase definitely rings true, however the bell might sound a bit too loudly. Stormchaser Knox is a young woman who lives in a world that is ravaged by disease and poverty, over which part of it has been taken over by dinosaurs. These places are completely uninhabitable for humans who are struggling to maintain an existence. The dinosaurs are hated and reviled by everyone except for Storm – although she keeps that as a terrific secret. Storm has just come of age where she can participate in ‘the Trials’ a contest where she can risk everything and ensure her survival but she does so in a world filled with dangerous monstrous like creatures and among people who are just as ruthlessly determined to win as she is. However along the way friendships form and loyalties are tested, to the point where Storm may not be able to rely on herself.

While The Extinction Trials are engaging, the similarities with Hunger Games and Divergent and other dystopian novels can’t be avoided. The new concept of having the dinosaurs as part of the danger, doesn’t really add anything other than new danger to the story. Fast paced and exciting, the story may not be one that appeals to those who have worn out their appreciation for YA dystopia but the new addition of dinosaurs is always something that I’m on board with.