Musician Sara Ryan is the next big thing in folk music. Here, she talks to Cinders about her musical background, being named new folk artist of the year and her plans for the future.

What was your first foray into music?

I grew up in Newbridge, Co. Kildare and growing up, the town was full of music. Every day of the week I had something musical I was involved in, between playing guitar in a trad group, my singing group, choirs, even dancing, just to name a few. But my favorite of all was my singing lessons with Lorraine Nolan my singing teacher, she is the most inspiring woman and she always believed in me. My family were much the same, they always encouraged me to write and to sing. I always had an urge in me to write too, whenever I have ever had anything going on I would right it down, it was such a release, and it continues to be, it really is my salvation to be honest. I knew I loved singing, I feel it’s the reason I’m on this planet, but when I realized I could combine the both of them, through songwriting, sure, jaysus I was delighted!  As I grew older I moved home a few times and one of the places I moved to was Stratford on Slaney, Co. Wicklow.

It was there that I threw myself even more into songwriting and started gigging with bands and solo too. This was so exciting at the beginning and it continues to be as I keep gigging away. I just love to perform.

What artists inspired you growing up?

It varies a lot, I have always loved folk, blues and soul, artists such as Joni Mitchell, Eva Cassidy, Florence and the Machine, Lisa Hannigan, Melody Gardot, Erykah Badu of course, Lianne La Havas and Cathy Davey. I adore Luka Bloom, Christy Moore and Damien Dempsey’s music and songwriting. They write about today’s Ireland and the Ireland of the past, this has always moved me a great deal, as I feel the struggles of our realities is what makes brilliant songs, it’s the pain that draws you in, and the freedom within that. I was mad for bands like The Arctic Monkeys and Kasabian in my teens, I was attracted to how free their melodies were and the raw and powerful sound of band. I also have always found deep house and techno quite meditative. 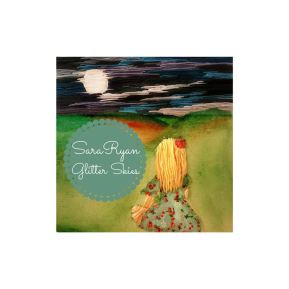 Your sound is very distinctive and old world, what process went into discovering what your signature sound would be?

I used to rack my brains trying to figure out what my sound was, it used to drive me mad, but I found that when I stopped looking and I just focused on singing and being comfortable with what that sounded like that made it a bit easier. The sound unfolds more naturally then when I let the song do the talking. I also am so grateful to have worked with outstanding musicians – Kealan Kenny, Fionn O’Neill, Brian Dunlea, Martin Atkinson, Alison Ronayne and an amazing producer (Christian Best) when recording this EP, “Glitter Skies”, in Monique Studios, Cork, and each person added so many beautiful elements to each song too. It was a really creative experience and I found that having each of their input was an integral part of moulding the sound too.

What was it like being named new folk artist of the year?

It really was such an honor and so surreal. It was an amazing feeling to have worked really really hard and then to receive such wonderful recognition just blew me away. It was a great confidence boost. The whole night was brilliant, and to be on the same line-up as artists who have inspired me a lot was an experience I’ll always treasure.

What are your ambitions for your music going forward?

I love traveling around and playing in different places with new audiences, and bringing my band with me is such a bonus, we have such good craic and it’s deadly playing my tunes, that really mean so much to me, with people who like playing the songs too, that still blows my mind a bit – that people like my songs! So yeah, I’d just like to keep doing that, keep traveling around singing in different places, sharing my music. I would love to play in Europe and America and even further afield too. My main thing is that I want to connect with people through my songs. It’s my souls purpose and I’m just loving all of it so far.

What kind of stories do you want to tell with your music?

I just write about my own life experiences, different challenges I’ve faced and how I’ve dealt with them. I often write from a place where I haven’t dealt with them yet, and that, as I’ve said before is a beautiful release, it’s very healing. I write about real life things and people that I’ve seen, and my encounters with them. Through songwriting I just try to share that, there is beauty in pain. The struggles I’ve faced, that we all face, are far from glamorous but they too can be seen as beautiful.

Euphoric Recall has a haunting melody that makes me think of film noir – what was the inspiration behind the song?

Thank you so much, that’s such a gorgeous compliment and image. I wrote this song a good while ago, the phrase “Euphoric Recall” refers to glamourising memories, it’s a state of mind where the mind plays tricks on you. It’s like when you look back on a time in your life that wasn’t so great but you trick yourself into thinking it was actually fine, to avoid the truth. That sorta thing. Very uplifting altogether haha!

If you were giving advice to any other young ambitious musicians what would it be?

I don’t want to sound pure cheese-y or preachy saying this, so I’m sorry in advance if I do, but I really would say, trust in your dream, everyday, regardless of what anyone thinks about it, if you feel in your heart that it’s right and if you feel that that’s your truth then believe in it and do everything you can to make it happen. If there are people around you who believe in you, stick with them and they will lift you up. Those who don’t believe in you and your dream, don’t give them an ounce of your time, that’s what will make your dream a reality. I wish I would have done that myself when I was younger, I cared so much what people thought and it really is so time consuming! It’s such a human thing to do though it’s  so normal, but try to not let people who care more than they should into your head. What others think of you is none of your business. What matters is what you think of you, as humans we have more strength than we realise. And most if all, just enjoy it, music is such a wonderful gift to have.

Sara’s EP Glitter Skies is out now on iTunes and Spotify.