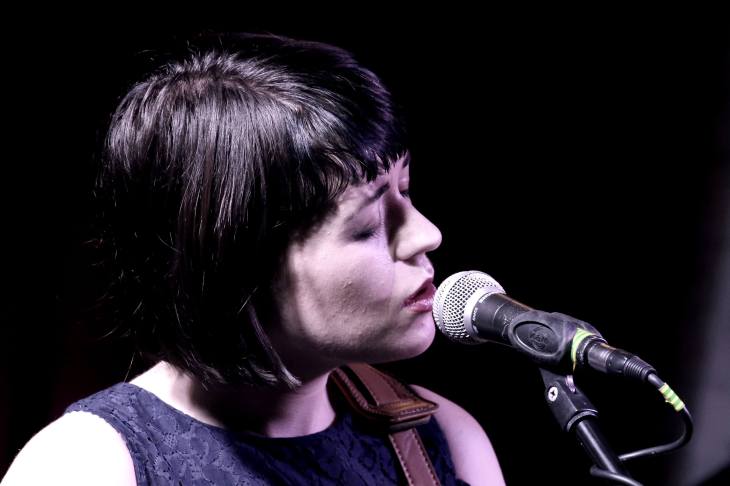 Limerick based singer-songwriter, Emma Langford is sweeping through the Irish music scene. With almost non-stop touring, she is one of the most uplifting artists gracing our stages right now. We spoke to Emma about her musical background, the pressures and joys of touring, anxiety and inspiration.

How did you get into music initially? Did you take music classes?

No, I had none of the discipline to do music outside of school. My parents tried to put me into violin lessons when I was very young and I have really distinct memories of being put at the back of the group at the Christmas performance and being just told to mime! I had no discipline at all as a child. I was always going to be an artist, I was going to draw. I grew up with that as my ambition, with my parents both as artists. I was drawing all of the time in school. I only started into music in a serious way in my teens. I started song writing and a sort of vague attempt at playing guitar. But I still didn’t start pursuing lessons seriously until about three years ago.

So you were mostly self-taught?

Yes, I was, entirely. I actually developed vocal nodules when I was twelve because of poor technique, singing.

I was singing all of the time, I was like a Disney princess, you couldn’t stop me! But I had really poor technique and I was a teenager and I thought I was doing everything right! But because of that I had to quit singing for about two years.

I wasn’t allowed to sing around the house, around my friends. In my teens I started going to vocal therapy, just to bring back my speaking voice. It was around then that I started to consider the idea of singing as a career.

Your sound is incredibly unique, you have a wonderful blend of influences and genres – was that a conscious decision?

I grew up listening to The Beatles, the house was full of a lot of different sounds. So I was never drawn to anything in particular.

I just filtered elements of different sounds that were around me at the time. I think being a singer songwriter, you have the freedom to do that, which is great.

With your album, The Quiet Giant, what was the process that went into creating that?

The Quiet Giant is kind of a culmination of the work of five or six years. When I started working on it, I hadn’t been expecting to be producing an album! I had been writing for years and I had produced an EP in 2016, which was a crowdfunded project. And then 2017 rolled around and I was offered a tour in Germany but it was contingent on my producing an album and a music video. So I had about six months to do that. So the songs that are on the album span from when I started writing to the year I produced the album. The backing and the arrangements all kept them on the same page in terms of tone, but A Quiet Giant is actually one of the first songs I ever wrote, so it’s kind of nostalgic for me.

It was nice to allow the album to celebrate that process of just starting songwriting to being a songwriter.

You’re currently touring at the moment?

Yes! Sometimes it feels like it never stops! I am touring in Germany and Switzerland in July and in August I’m touring for a week in Denmark! In October I’m hoping to take a break for a little while, hopefully work on some new music, learn some new instruments and go to songwriting seminars hopefully! At the moment I’m really enjoying touring, it’s really good fun, but you do need a break from it sometimes, I’ve learned.

It must be a lot of pressure constantly going from place to place?

It can be, but I’m really lucky, I’m living with my parents in Limerick, that’s where I’m based, so I’ve got a really nice place to come back to, to reset and de-compress. But at the same time, when you’re touring so consistently, you are always on and just keeping your energy up all of the time both for the gigs and for promoting them can be draining. It’s probably more mentally draining than physically draining. When your brain is always ‘on’ that takes a lot out of you.

It was nice to allow the album to celebrate that process of just starting songwriting to being a songwriter.

I suppose the upside is getting to perform in front of different crowds and getting to meet all kinds of people at your shows?

You never know who’s going to be in the audience, and you never know what opportunities are going to occur as a result of a particular gig. You might do a gig that you don’t think went great, but someone will be in the audience and they will have heard something that they really like and they might invite you to go somewhere else. Those kind of knock-on opportunities are great. For the last few months I’ve been touring with Sara Ryan (who was also featured in Cinders) the two of us have been hanging out and learning from each other and learning from each other’s sounds. There is so much opportunity for growth and learning when you’re working with another musician. I think I’ve learned a lot from Sara about kindness and patience and giving of yourself which is great. With touring itself its really special to be able to share your songs and your stories with totally new people. That’s really special.

What would you say your process is when you’re writing a new song?

Most often I don’t really know that I’m dealing with something until I write a song about it. Like a good Irish person I have a tendency to push all of my worries and concerns into a little ball and not deal with it. I just let them condense until it becomes unbearable.

Most often I don’t really know that I’m dealing with something until I write a song about it.

Until it becomes a song. in terms of a writing process, it’s different every time, depending on what I’m working on. I could wake up in the morning with a melody in my head that I dreamt up and then I start working on that. I could be walking down the street, and see a person stopped at a traffic light and that becomes a melody. The nice thing about song writing is that you get to channel the world around you and show people life through your eyes. Once you’re telling your personal story in a way that only you can do, it’s very important.

With that in mind, songs of yours like Tug O’ War are very powerful with its message of anxiety and how that can affect you?

Most of my songs take a bit of time to write, but when I wrote Tug o’ War, it just poured out of me. It had all really compounded, that anxiety, that stress and that panic. I had allowed it to build up that when it came to writing the song, it just flowed out. A lot of the time when you’re songwriting you have a tendency to second guess every word, every sentence, but sometimes you have to just let it happen and the most obvious way of saying something, can be the best way of saying it. You’re just saying exactly how you feel about something and I think that’s what made Tug o’ War such a relatable song for lots of people. The last thing that someone with anxiety needs is a song they have to deconstruct to understand. I just wanted to get the message out there, that I was feeling this and a lot of people feel this and that people aren’t alone with it.

There’s a lovely gospel flavour to Tug o’ War, was that intentional when you were writing it?

It was a combination of things really. One of my tutors in college was Kathleen Turner, who is a gorgeous songwriter, and she is incredible. She would have thought me Gospel in college (I did the BA in Voice and Dance in UL) and we had the opportunity to take gospel lessons, which was really cool. She always has been a real role model for me in music and she writes a lot of gospel music. On top of that I had just been supporting Ben Caplan who is a  brilliant Canadian musician and he also has a very gospel flavour to his music. So between listening to the two of them I think it really evoked something in me that I wanted to communicate. I felt that that gospel vibe was the best way to express what I was feeling and that it would be ‘healing’ for the listener. I feel like gospel music as a really healing element to it. It just seemed like the perfect genre to tell that story through.

And alternatively some of your other songs have a strong trad influence, like Closed Book?

I adore the sounds and I’ve let it take over a lot of my songs, and the next album is actually headed even further in that direction. It’s really nice to be able to represent in the Irish tradition in some way when I travel with my music!

What is the best advice you’ve gotten in your career as a musician?

Well one, it’s a little clichéd and cheesy but my mum always says that old quote, ‘To thine own self be true’. In any moment of doubt in secondary school, I’d come home mimicking something that someone else said, and my Mum would always say, ‘that’s not you, to thine own self be true. To hold on to that sense of yourself, and that’s found its way into my music as well. That’s really helped. And I don’t remember where I heard it, but just make work happen. Just do it. Whether it’s successful, or whether you’re going to continue with it, just write the song, learn the scales. Come up with guitar riffs, just keep working, keep constantly creating and eventually something will come of it. I think most musicians will tell each other that. Just keep creating work. That’s always been very good advice that I often for get to follow for myself but will always give to someone else, you know the way!