Friendship can be tough to navigate, especially online! That’s certainly something that Emma Nash can relate to. Emma is the main character in Chloe Seager’s new series. The second book in the series, Friendship Fails of Emma Nash is out soon and we got speaking to Chloe about friendship, the internet and empowering girls online!

1.Friendship Fails of Emma Nash is your second novel, was writing it a very different experience from the first?

Totally different. With my first novel I was so unselfconscious. I wrote it giggling away in my room, not seriously thinking anyone would read it. With the second one you know people are going to read it, so you stop writing it just for you. As soon as you start thinking too much about what other people are going to think, it kills the creative process (or at least, it did for me). The first draft of book 2 was a longer, more painful process than for book 1. I then realised it was rubbish and rewrote most of the book in two months, trying to have fun again as I went. (Which was, obviously, the whole reason I started writing!) I’m so much happier with it now.

2.Where do you feel Emma is emotionally in this novel? Has she learned a lot since Editing Emma?

Emma made a lot of mistakes in the first novel, mainly to do with relationships. So she starts Friendship Fails in a much wiser and more secure place in terms of her romantic life… But then inadvertently starts making mistakes in her friendships! This is often how I felt as a teenager – as soon as I felt better about one thing, I’d start feeling insecure about something else. 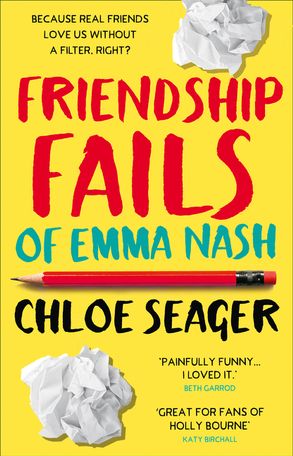 3.The internet and social media have a huge influence on how Emma lives her life- do you think that the pressures of social media can be a difficult path to navigate for young women?

In book 1, Emma’s problem is very much about obsessing over her ex-boyfriend’s profiles, and the fact she can still see everything he’s doing makes her break up more difficult to move on from. In book 2 she starts obsessing over her own profiles and constantly comparing herself to other people. Worrying about how I was coming off, or whether other people were having better lives than me, was a big part of my growing up experience and 100% linked to social media. It must be a million times worse now. (Although, at least teenagers now don’t have to deal with the peril of Top Friends!)

4.How do you think the internet has changed our approach to friendships and relationships? Do you think it’s something that is important to be mindful of?

It’s opened up a whole new world of possibilities, hasn’t it? New relationships and friendships are so much more accessible, now. For friendships I think that’s great, for relationships it probably has encouraged more of a ‘disposable’ culture, but then again, depending how you use it it’s still a pretty incredible gift. Especially for teenagers, when you’re going through what’s quite an isolating period. Pre-internet, if you didn’t happen to make friends at your school that was it. Now instead of being stuck with it, you’re actually able to talk to other people all over the world!

There’s so much to say about this topic, but one thing that’s not been healthy for me is always seeing the best bits of everyone’s lives; sometimes it’s lovely but sometimes it’s quite damaging for my state of mind. I have to remind myself there’s a lot of people’s lives that you don’t see. I also find it makes me forget to actually talk to people, because I’ve already seen their updates… But just because I already know my friend just got married, or got a new job, doesn’t mean I don’t need to interact with them!

5. Do you get as annoyed as we do with phrases like ‘oh, she’s not like other girls’ or ‘well, I just find it hard to be friends with other girls, I’m just too competitive/nerdy’ or our personal favourite: ‘I just find boys easier to get along with, there isn’t as much drama.’? Why do you think girls are conditioned to believe that female friendship is not a desirable friendship to have?

I think there’s a lot of focus on romance, as if it’s more important than friendship. Even if in certain books there have been great friendships the whole way through, the end is often about a romance coming together. (Which is why I wanted to be sure that both Emma book 1 and 2 ended on a note about friendship.) This emphasis on romance is general, but I think it’s targeted more at girls.

There’s also a lot of other stuff that discourages them from prioritising their female friendships, such as portrayals of – as you say – girls who are ‘cool’ because they ‘just find boys easier to get along with.’

To say I don’t see competition in certain friendships would be a lie – there are all kinds of different friendships out there. But there are so many healthy, supportive female friendships, and it does aggravate me not to see them being sufficiently represented and valued. Why this is I’m not sure… just more of the same sexism that’s there throughout all of society, I guess?! Why is it that we assume boys won’t want to read books with girl protagonists? Why is it that a girl having lots of sexual partners means she’s a slag but it’s ok for a boy? I wish I knew…

6. Can you tell us about some of your favourite female friendships throughout history?

SO MANY. I want to be part of Taylor Swift and her crew, obvs. I adore Jennifer Aniston and Courtney Cox.

Two of my personal faves are the Edies – Edith ‘Big Edie’ Bouvier Beale and Edith ‘Little Edie’ Bouvier Beale. It’s an unconventional one as they were mother and daughter, totally codependent and totally bizarre, but I’m not sure anyone who’s watched Grey Gardens could deny their deep, unbreakable connection to one another…or that, despite their differences, they gave each other a hell of a lot of support and had tons of fun.

Recently, I was surprised to read about Ella Fitzgerald thanking Marilyn Monroe for her big break. Ella was turned away from playing in a club because of the colour of her skin, which Marilyn protested, and said if they gave Ella the gig she’d sit in the front seat every night to make sure the press and the crowds turned up.

I’ve also always found Jane Austen and her governess Anne Sharp’s relationship really touching. It was frowned upon as her governess wasn’t deemed Jane’s equal, but Jane trusted Anne to read her stories to give critiques and was apparently the last person Jane wrote to on her deathbed.

7.What have been some of the best things you have learned from your own friends?

Be yourself. ‘Not everyone’s going to like you, but we do.’ (Haha!) They let me know when I step too far, when I’m being unreasonable, or when I need to stand up for myself; I need them for their sound advice. Also important life skills like how to make jelly shots and skittles vodka.

8.What advice would you give to other aspiring authors?

Finish the book (simple but true!) Take advice – editorial input from others is crucial – but make sure the book doesn’t lose your own voice. At the end of the day it’s got to be your book – the book that only you could write. 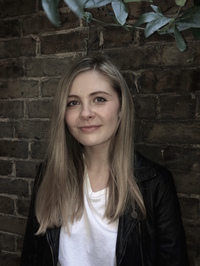