Do you like myths? Fantasy? Ancient Greeks? Love stories? Then Outrun the Wind is the book for you. Taking us on a breakneck tour of some of the most famous Greek gods and their domain Outrun the Wind tells the story of two girls who find themselves in debt to two of the most ruthless of the Greek gods – Artemis and Apollo. Kahina is expected to do nothing but serve the goddess Artemis – and never fall in love. However the minute she uses her power to help save legendary warrior Atalanta, she knows she is well on her way to breaking both of those rules.

When Atalanta is threatened with a marriage she doesn’t want she and Kahina come up with a plan that will allow her to fight for her own hand. If you’ve read the myth of Atalanta, then you will know she races her suitors and announces that only the man who beats her will win. Outrun the Wind takes a different direction from the myth – where Hippomenes is a much more dangerous figure than he is portrayed in the original story. The girls are given the love story instead and Outrun the Wind is much more compelling for it.

Sailing through the centre point of most Greek myths, author Elizabeth Tammi makes the story feel right at home. She captures the pettiness and power of the gods and the helplessness of the mortals in their service to them.

This is true of both Atalanta and Kahina, whom the narrative alternates between. Atalanta is a fearsome fighter whose speed makes her a valuable warrior. Kahina is a priestess of the goddess Artemis, who rescued her from service as an oracle in Apollo’s city of Delphi. If Greek literature is your thing, then you’ll enjoy the cameos that areas and people of significance in Greek mythology show up throughout the story.

The romance between Kahina and Atalanta is swoon-worthy, its need for secrecy placing extra tension and pressure on the girls. There is a chemistry between them that makes you wish as a reader, that the pair were brought together sooner, rather than drawing out their time apart.
That being said, Outrun the Wind is a swift and excitingly paced retelling, just like its main characters, Atalanta and Kahina, I can see many readers shipping them and their passion filled love story. 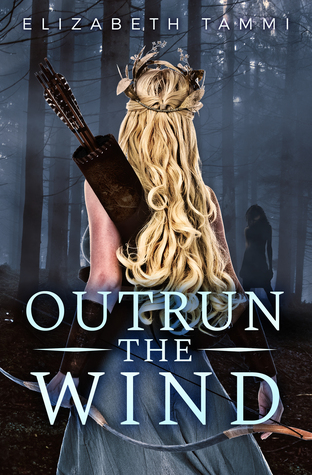 Outrun the Wind will be available on November 27